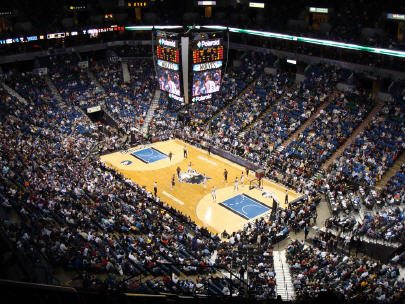 Whether it is an arena, ballpark or stadium there are certain features that make one stand out from the rest when watching a game on TV or actually being there in person. Although unusual, the court at the Target Center may be one of these features as it has a parquet floor, one of only three in the NBA. This type of flooring is of mosaic wood that is fitted together using tongue and groove wood.

The Minnesota Timberwolves were part of the late 1980s expansion of the NBA along with four other teams. After being awarded a team, the city constructed a new basketball arena in downtown Minneapolis. However, the arena was not ready for the Timberwolves first season in 1989-90. During their first season they played their games at the Metrodome, home of the Minnesota Twins (MLB) and Vikings (NFL). Here they attracted some of the largest crowds in NBA history.

Bet on the Minnesota Timberwolves at Ladbrokes.com! Find out how to get a free bet with a Ladbrokes promo code at https://bonuscodepromos.co.uk/ladbrokes-promo-code-free-sports-bet/. Find more free bet offers at BonusCodePromos.co.uk.

I worked in this beautiful arena from 1991 to 2004. But,my first time in the building was for the Steve Miller Band concert in the summer of 1990.I was SO impressed by this shiny,new beautiful arena following this AWESOME concert,that i wanted to work there.I was happy to land a job as a custodian,and took pride in helping with the upkeep of my new favorite venue.I look back on my years there with fond memories,as I worked with some wonderful people.This arena holds a very special place in my heart,I can't wait to see all of the new inprovements in 2017.Long live the Target Center!!