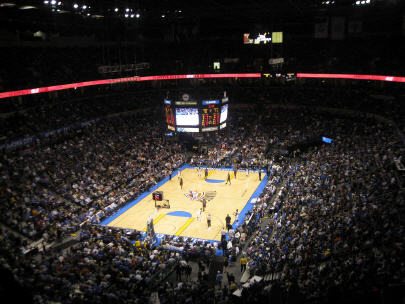 Traditionally, the State of Oklahoma is known for its collegiate athletics as the Sooner State is home to the University of Oklahoma and Oklahoma State. In 2008 this changed as the NBA’s Oklahoma City Thunder became the state’s first professional sports franchise. For decades citizens throughout Oklahoma have been strong supporters of minor league and collegiate sports programs.

As early as 1993, Oklahoma City proposed building a new sports and entertainment facility as part of their capital improvement plan. In 1999 construction of a new sports arena began as the city hoped to land a NBA or NHL team. Three years later the arena was completed and named the Ford Center after the Oklahoma Ford Association and Dealerships bought the naming rights. Once completed, the Ford Center became the home of the Central Hockey League’s Oklahoma City Blazers and numerous sporting events from Oklahoma State and the University of Oklahoma.

On October 29, 2008 the Thunder played their first game at Oklahoma City’s Ford Center against the Milwaukee Bucks. For basketball, the Ford Center has a seating capacity of 19,599. Four levels of seats enclose the court and include over 3,000 club seats and 49 luxury suites. In July 2011 the Ford Center was renamed Chesapeake Energy Arena after the Chesapeake Energy Corporation purchased the naming rights for 12 years.

Bet on the OKC Thunder at Intertops! Learn more about Intertops at https://bettingsitesusa.net/intertops-sportsbook-bonus-codes/