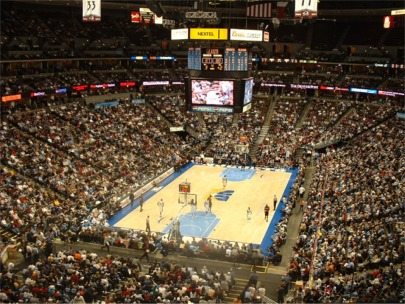 The Can as it is known to Denver Nuggets fans, the Pepsi Center is the place to be during the winter months in the Mile High City. The Nuggets have been a part of the NBA since 1974 when they moved from the American Basketball Association. One year after becoming part of the NBA the Nuggets began playing at McNichols Sports Arena. The 17,000 seat arena was the home of the Nuggets and two NHL teams, the Colorado Rockies and later the Colorado Avalanche. Like every other team in the NBA and NHL, a new arena was needed for both teams in order to remain competitive in both leagues. Construction began in November 1997 and was named after Pepsi bought the naming rights for $68 million.

In 1999 the Nuggets played their first game at the Pepsi Center. The arena has a seating capacity of just over 19,000. It features 95 luxury suites, 1,800 club seats, the Lexus Club, the Blue Sky Grill featuring western crusine and The Denver Post Newsroom. Outside, the Pepsi Center’s façade reflects the neighborhood brick buildings and old rail yard. Fans enter through two atriums that have sculptures of basketball and hockey athletes in poses. Inside the Pepsi Center fans can see the Rocky Mountains and downtown Denver.

History of the Denver Nuggets

The Denver Nuggets are a professional basketball team based in Denver, Colorado. They were originally founded as the Denver Larks in 1967 as a charter member of the American Basketball Association (ABA). The team was later renamed the Rockets and then the Nuggets, reflecting their current name since 1974.

The early years of the Nuggets saw them as a dominant force in the ABA, reaching the ABA Finals in 1976. The team was led by star player David Thompson, who was a four-time ABA All-Star and the league’s scoring champion in 1976. The Nuggets’ success in the ABA led to their merger with the National Basketball Association (NBA) in 1976.

In the 1980s, the Nuggets struggled to maintain their success and went through a series of coaching changes and roster overhauls. Despite this, they still managed to make the playoffs several times, including a trip to the Western Conference Finals in 1985.

The 1990s marked a new era for the Nuggets, with the team drafting star players such as Dikembe Mutombo, Mahmoud Abdul-Rauf, and LaPhonso Ellis. The team also made several trips to the playoffs, including a trip to the Western Conference Finals in 1993-94.

In the late 1990s and early 2000s, the Nuggets underwent significant changes, including several coaching changes, a new arena, and new players. Despite these changes, the team continued to struggle and missed the playoffs for several seasons.

In 2003, the Nuggets drafted Carmelo Anthony, who would go on to become one of the best players in franchise history. Anthony led the team to several playoff appearances, including a trip to the Western Conference Finals in 2008-09.

In the 2010s, the Nuggets continued to be a competitive team, making the playoffs in several seasons and reaching the Western Conference Semifinals in 2012-13. The team was led by several key players, including Ty Lawson, Danilo Gallinari, and Kenneth Faried.

In recent years, the Nuggets have continued to build a strong and competitive team, led by standout players such as Nikola Jokic, Jamal Murray, and Michael Porter Jr. The team has made several trips to the playoffs, including a trip to the Western Conference Finals in 2020-21.

Throughout their history, the Denver Nuggets have been a team known for their resilience and determination. Despite several periods of struggle, the team has always managed to bounce back and compete at the highest level. Today, the Nuggets are one of the top teams in the NBA and a force to be reckoned with.

In conclusion, the Denver Nuggets have a rich history that spans over five decades. From their dominance in the ABA to their recent playoff runs, the Nuggets have always been a team that is dedicated to competing at the highest level. With a talented roster and a winning mentality, the future looks bright for the Denver Nuggets.

Bet on the Denver Nuggets at Intertops! Find all the Intertops bonus codes at https://gpsts.org/intertops-poker-bonus-code-promotions/

Find another review of Intertops at https://usacasinocodes.com/intertops-casino-coupon-code-bonus/