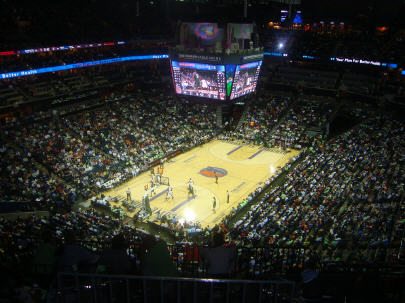 Designed as a celebration of gatherings, Time Warner Cable Arena is one of the NBA’s newest venues. Constructed in the Uptown area of downtown Charlotte, the arena is inspired by the event, the city and the fans attending games. While Time Warner Cable Arena is now a fixture in the City of Charlotte, getting a new facility built was a long process that led to one basketball team leaving town and the city receiving a new expansion franchise.

North Carolina is known as having a large fan base for college basketball and teams that play in the ACC Conference. For nearly two decades fans have been supporting professional basketball, first with the Charlotte Hornets and now with the Charlotte Bobcats. In 1987 Charlotte was awarded a NBA franchise, the Hornets, that played at the Charlotte Coliseum from 1988 until 2002. The Charlotte Coliseum was the largest arena in the NBA with seating for 24,000 fans. Throughout the 1990s the Hornets were one of the most popular teams in the NBA with tickets to games becoming the toughest to obtain in the NBA.

As the 1990s ended attendance at games declined even though the Hornets remained competitive. Owner of the team, George Shinn, wanted a new arena for his team due to the Charlotte Coliseum lacking many of the modern amenities that newer arenas had in the NBA. A referendum was placed on the ballot in 2001 with fierce opposition from many that led it to be defeated. However, the city increased the hotel and leisure tax in order to raise funds for construction of a new arena. This measure was to late as the Hornets moved to New Orleans for the 2002-2003 season. 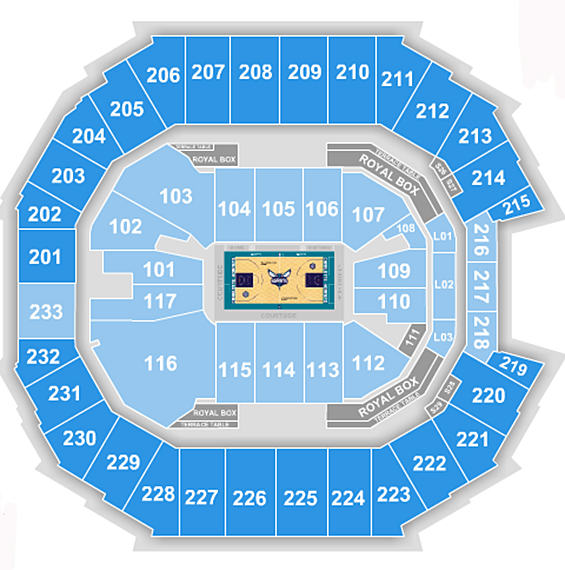 After the Hornets left for Charlotte, the NBA awarded the city an expansion franchise, the Bobcats. The $260 million Time Warner Cable Arena was constructed in downtown Charlotte and opened in 2005. The arena features a modern design but includes many features that allows it to fit in with its surroundings. The Bobcats played their first game at the arena on November 11, 2005. The arena has a seating capacity of just over 19,000 for NBA games and 20,200 for college basketball games. It has many amenities including 2,600 club/courtside seats, 67 suites and 60 lodge boxes. Open walkways and exposed staircases allow fans to get from their seats to concessions with ease. The arena has the largest indoor scoreboard and largest videoboard in the NBA. One of the most unique features of the scoreboard is the cityscape that is located on the top showing the Charlotte skyline. Not only is the arena home to the Bobcats but hosts many other events including concerts and college basketball. The arena hosted the 2008 NCAA Basketball Tournament and the ACC Men’s Basketball Tournament. Originally the arena was known as the Charlotte Bobcats Arena, until Time Warner Cable bought the naming rights.