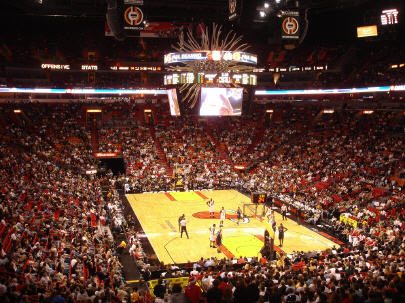 For fans of any sport, names of arenas and stadiums can be a challenge. In the NBA, this is even more of a challenge because two arenas share similar names, American Airlines Arena in Miami and the American Airlines Center in Dallas. Although the Miami Heat have existed for only two decades they have already called two arenas home. The expansion Miami Heat began playing at the Miami Arena in 1988-1989 during their inaugural year. For over a decade they played here along with the Florida Panthers (NHL). With a seating capacity of just over 16,000 both the Heat and Panthers wanted new modern facilities to play at.

American Airlines Arena was constructed along Biscayne Bay in downtown Miami. The Miami Heat played their first game at the arena on January 2, 2000. From the exterior American Airlines Arena features a sleek modern design. This design is also found inside where views of the city skyline and bay can been seen from the concourse. Nearly 20,000 fans can watch the Heat play from three levels of seats that enclose the court. The arena has five configurations that can be arranged to seat 5,000 to 20,000 fans. American Airlines Arena has many amenities including a restaurant and bar that has views of the bowl. Fans can attend games in luxury by sitting in the view level that has seating for 800 fans. The Heat have one of the most modern and sleek video/scoreboards in the league that changes colors depending on the atmosphere during games. Heat fans attending games during the past several years have seen one of the best teams in the NBA, as the Heat won the 2005-06 and 2011-12 NBA Championship. American Airlines Arena hosts many other events other than the Heat including concerts and hosted the 2009 NCAA Basketball Tournament.

Have you seen a game here?

Leave us your thoughts below!