For nearly a century the borough of Brooklyn has been known by sports fans as the former home of the Brooklyn Dodgers and Ebbets Field. That changed in 2012 as professional sports returned to Brooklyn as the Nets moved from New Jersey to the Barclays Center. For 35 seasons, the Nets played at the Izod Center and most recently at the Prudential Center. The idea for a new arena in Brooklyn was first proposed in 2004 by then owner of the Nets Bruce Ratner. Financing and eminent domain issues delayed construction of the arena for six years. Groundbreaking occurred on March 11, 2010. Barclays PLC purchased the naming rights to the arena for 20 years at an estimated cost of $200 million. Built near the Atlantic Terminal Mall, the Barclays Center was constructed near where the Brooklyn Dodgers had proposed building a dome stadium in the 1950s. Built at a cost of $1 billion, the Brooklyn Nets played their first game at the Barclays Center on October 31 against the Indiana Pacers. The arena has a seating capacity of 17,734 for the Nets. 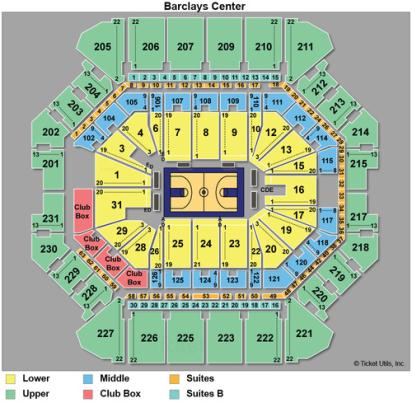