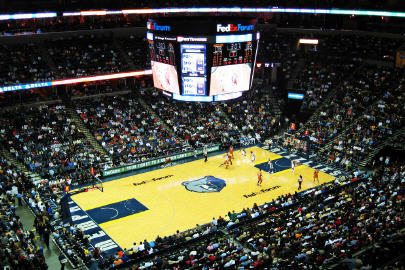 Home of the Memphis Grizzlies, the FedEx Forum is one of the newest arenas in the NBA. The Grizzlies have a short history as they became an expansion franchise in 1995 in Vancouver, Canada. The team spent six season in Vancouver, never having a winning season.

Their lack of success showed at games as few fans attended games. The team was bought by Michael Heisley in 2000 with the assumption that the team would stay in Vancouver. However after the 2000-01 season the team moved to Memphis. The Memphis Grizzlies played at the Pyramid for three seasons.

A new state of the art arena was constructed in the southern area of downtown Memphis for the Grizzlies. FedEx Corporation, whose headquarters are in Memphis, purchased the naming rights to the arena, thus getting its name FedEx Forum. Built at a cost of $250 million, the arena was financed through public bonds by the Memphis Public Building Authority. Fans have many options for seating as the FedEx Forum has five levels of seating with just over 18,000 seats. It has 22 courtside suites, 32 club seats and 80 club boxes.

The arena was designed with a Memphis theme that shows the history of music throughout the concourses of the building. Themed areas through the concourses include the Radio and Recording Zone. Public art by local artists display paintings of the area’s music history. The FedEx Forum has many amenities including a team store, the Jack Daniels Grill that is a casual sports bar and a premium restaurant.

Bet on the Grizzlies at Ladbrokes, and with this Ladbrokes promo code at Promocodeladbrokes.co.uk, get three free bets worth £10 each!